The Trinity-Sergiev Lavra is located not far from Moscow – in the Moscow suburb of Sergiev Posad. Many buildings of religious significance have been built on the territory of the lavra: Assumption Cathedral, Trinity Cathedral, Smolenskaya Church, etc. Nowadays, excursions are held on the territory of the lavra, which acquaint tourists with the architectural beauty and history of ancient buildings.

The history of its origin.

The year of the creation of the lavra is considered to be 1337 – then Sergius and his brother went to the dense forests near the city of Radonezh, seeking solitude and prayer. In 1340 they erected a small church. Soon Sergius was left alone – his brother could not stand the hermit’s life, and went to a more habitable monastery.
Very little time passed – and the rumor about the hermit Sergius spread around the neighborhood – people who also longed for monasticism began to come to him from everywhere, the monastery expanded very quickly, and Sergius began to be revered as a saint.

It was to Sergius of Radonezh that Dmitry Donskoy came for a blessing before the Battle of Kulikovo. After the victory in it, the glory of the monastery increased even more, and soon the monastery became the most influential in all of Russia.
Every monarch who came to power helped to build new temples on the territory of the lavra and restore the old ones.
The Trinity-Sergiev Lavra she also experienced difficult times: siege by Lithuanians, raids by Mongol Khans, fires, but she recovered again and again.

Excursions to the Lavra.

During the tour of the Trinity-Sergius Lavra, visitors will learn its entire history in more detail, as well as the life of St. Sergius of Radonezh.
The route includes a visit to several of the most interesting temples:
Trinity Cathedral is the oldest among the other buildings. The year of construction is 1422. It is here that the relics of St. Sergius and the icons of Andrei Rublev are kept.

Assumption Cathedral – created by order of John the Terrible. Inside the temple is decorated with unique frescoes created in the second half of the 16th century.
The Church of St. Sergius with a Refectory is a very colorful building built at the end of the 16th century. It looks more like a palace than a church, thanks to the rich decor.

In addition to visiting buildings, on the territory of the lavra you can visit a spring whose water is considered healing.
When visiting temples, you need to remember that clothes should be closed, women also cover their heads.
The Trinity-Sergius Lavra is a UNESCO World Heritage Site. This is a sacred place where the history of the Russian land has been created for centuries. The number of people wishing to touch religious shrines is growing every year, which proves once again that the Trinity-Sergius Lavra is still the main monastery in Russia! 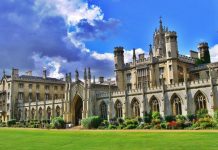 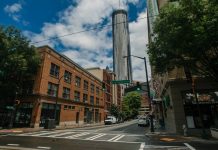 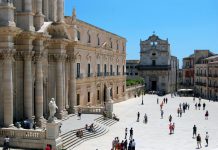 The birthplace of the great Archimedes, the Greek polis in Italy – Syracuse 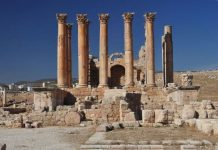 The snow-white miracle of Ephesus