Beautiful places of the world Trentino 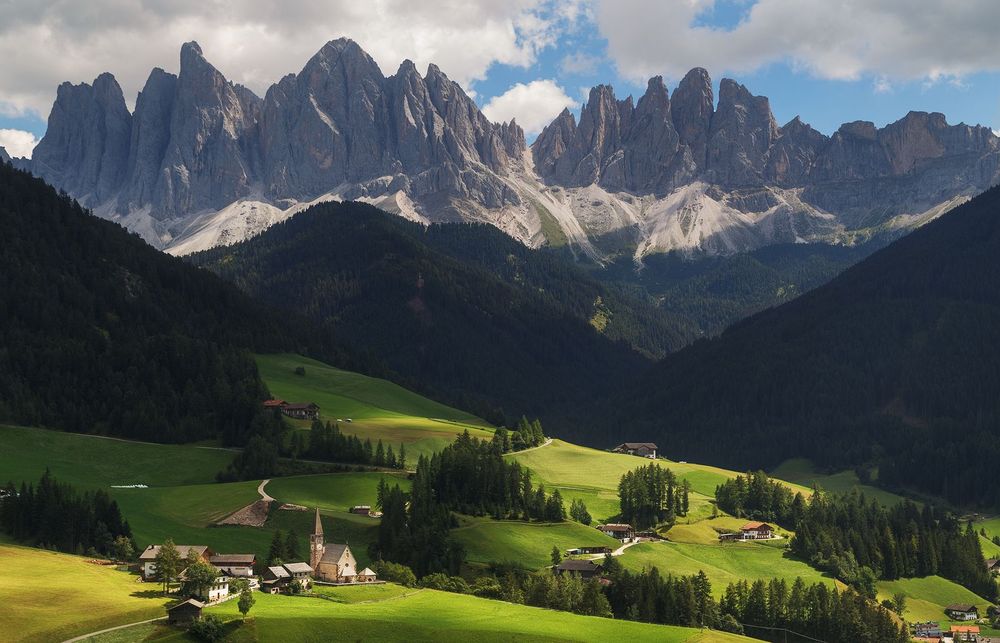 It is a mainly mountainous province, rich in rivers, torrents and numerous lakes, clusters and chains of mountains of singular beauty, divided in two by the valley of the river Adige. To the west one finds the glaciers of the group Adamello-Presanella-Care Alto and the group of Brenta. To the east the groups of Lagorai, Latemar, the Dolomites of Fassa, and the Pale di S. Martino. Many alpine valleys break away from the valley of Adige: the Valsugana, the Vallarsa, the Val di Non, the Val di Sole, the Val di Cembra, Fiemme and Fassa; inside instead the valley Giudicarie and Rendena.

The principle lakes are those of Garda, Caldonazzo, Tovel and Ledro; thermal waters gush forth from springs rich in therapeutic properties. Extensive coniferous forests cover the dolomitic slopes and wide table-lands like those of Folgaria, Lavarone and Pine. Three natural parks, Adamello-Brenta, Paneveggio-Pale of S. Martino and Stelvio conserve the typical species of animals and vegetation of the alpine environment including even the bear.

Cities: The independent province of Trento is endowed with a special statute which gives it particular legislative authority. Trento is the administrative headquarters of the province and of the region Trentino-AltoAdige. Rovereto is the second centre of the province, a city of culture and industrial site.

Land on the frontier between the German world and the northern Italian civilization, Trento presents a different and mutable figurative panorama in which the contributions of diverse cultures have joined and produced an art with authentic original characteristics. The oldest artistic testimonies come from the late medieval period and are conserved in the churches of S. Pietro in Bosco in Ala, of Tenno and of S. Romedio; together with many finds from the Roman and Paleochristian ages. The main monuments from the Roman age are the Cathedral of S. Virgilio in Trento and the Basilica of S. Lorenzo.

The Renaissance style marks many buildings and churches in Trento, such as the Castle of Buonconsiglio, the Palace of Albere, the church of S. Maria Maggiore. Typical Gothic architectures are those of the church of Civezzano, S. Apollinare, S. Zeno, Finera di Primiero and Vigo di Fassa. A small jewel of European Gothic painting is represented by the “Ciclo del Mesin” in the Torre Aquila of Trento. An intense pictorial activity took place in the first half of the sixteenth century, together with a flourishing activity in the minor arts. Several testimonies of the paintings are conserved in churches and buildings.

Earthen pyramids at Segonzano in the Val di Cembra; Val di Genova, a picturesque alpine valley; the Alto Gard Trentino, the Dolomites, the great arena of alpinism, traversed by a stitched network of excursionist lanes and ways; numerous antique castles which dominate the principle valleys: Castel, Beseno, Sabbionata, Drena, Stenico, Caldes, Thun, Pergine and Ivano. At Trento: The castle of Buonconsiglio and the palace of Albere, residence of provincial art museums; the churches which hosted the famous “Council of Trent”, the romantic Cathedral and the church of S. Marina Maggiore. Naturalistic and archaeologic collections are lodged in the natural science museum of Trento. The diocesan museum of Trento conserves precious testimonies of the sacred art, wooden artifacts and flemish tapestries. At S. Michele in Adige there is the museum on the practices and customs of the Trento people. At Rovereto the castel holds one of the greatest museums on the Great War.

Top 10 Free Things to Do in Berlin.