Lying on the southern shores of Lake Tanganyika in the Northern most tip of Zambia, Sumbu National Park covers an area of just over 2000 square kilometers encompassing 100kms of some of the most pristine shores of this vast Lake. Its beauty ranges from sandy beaches, vertical cliffs, rocky coves and natural bays to the rugged hills and deep valleys of the interior. The Lufubu River winds its way through a valley flanked by 300 meter escarpments on either side.

The Park is dissected from west to east by the sizeable and perennial Lufubu River, which also demarcates the eastern boundary of the Park up to the river’s discharge into Lake Tanganyika. Nkamba and Chisala Rivers are ephemeral and smaller than the Lufubu, draining Tondwa Swamp into Nkamba and Sumbu Bays respectively, the former through an attractive valley with abundant wildlife in relation to other parts of the Park. Much of the park is covered by combretum thicket, but along the lakeshore there are many strangler figs and ‘candelabra’ trees along with the strange and interesting boulders balanced on top of one another.

Although wildlife numbers have declined, there is still a wide range of species present in the park and numbers are recovering, although sightings are not guaranteed. Roan, sable, eland, hartebeest as well as buffalo and zebra and occasionally elephant, lion and leopard. Bushbuck, warthog and puku often frequent the beaches. The rare blue duiker, a small forest antelope is one of the Park’s specialities along with the shy swamp dwelling sitatunga. Other species seen here are the spotted hyena, side-striped jackal, serval, impala, waterbuck and reedbuck This side of the Lake is teeming with crocodiles, so swimming is obviously not advisable. Some reach up to six meters in length. Hippos often emerge at night around the lodges to ‘mow’ the green grass.

Birdlife in the park is still prolific with many migrants coming down from East Africa and up from South African regions. The flamingo is one of the more spectacular migrants while some of the lakeshore inhabitants include the skimmer, spoonbill, whiskered tern along with many different storks, ducks and herons. Commonly encountered species around the lake include the grey-headed gull, lesser black-backed gull, white-winged black tern, whiskered tern, African skimmer, and of course the ubiquitous fish eagle. The palmnut vulture and Pel’s fishing owl are also occasionally seen.

The Balancing Boulders are shrouded in myth and are of great significance to the local Tabwa people. On the Nundo Head Peninsula a large boulder balances upon three smaller ones and is the scene of annual ceremonies in which a white chicken is sacrificed to honour the God Nundo. Further east at Kabwembwa, just outside the Park there is a sacred place where the Spirit of the Lake resides. Local fishermen throw offerings into the water here whenever they pass as a sign of respect.

Nsumbu is famous for it’s excellent angling off the shoreline and some of the better catches are the large Nile perch, goliath tigerfish, vundu catfish, lake salmon and the tasty yellow belly or ‘nkupi’. Occasionally the much sought after golden perch is caught. The Zambian National Fishing Competition takes place here every year around March or April and some world records have been set here. 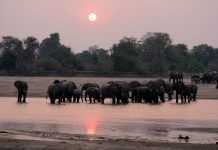 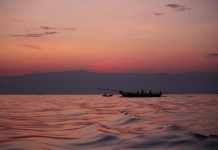 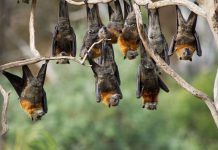 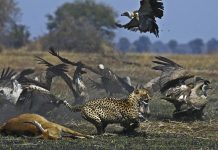