This ancient city at the foot of Vesuvius was quite prosperous in Roman times. It was destroyed in 79 A.C., following the famous volcanic eruption which covered it with a layer of pumice and ash. The first archaeological explorations took place towards the mid-18th century, and excavations soon began in earnest, but not until 1860 were they conducted in an orderly, systematic fashion. It is thought that, to date, about three-fifths of the ancient town has been excavated. Pompeii is one of the most important archaeological sites in the world, because it provides a complete picture of the topography and life of a Roman town.

Walk with us through ancient streets to visit the Villa of the Mysteries, the House of the Faun and of the Vettii brothers. Discover baths, basilicas, temples, theatres, private homes, the amphitheater, even the palestra where gladiators trained for the arena.

For those who choose to travel with us by private car, we’ll also visit the so-called Villa of Poppaea, the second wife of the emperor Nero. It is located at Oplantis, which was a holiday resort area for the rich who had their vast suburban villas built here in order to live in sumptuously decorated surroundings far from the noise and inconvenience of Pompeii. Amongst these villas stands one whose size and rich mural decorations set it apart from all of others. The Villa of Poppaea is the largest and most luxurious suburban villa so far brought to light.

The town, built on an elliptical plan, was divided by a regular network of streets intersecting at right angles. The houses generally had two floors, with a garden or internal courtyard, and were decorated by architectural coverings and paintings of fine quality.
The Forum, a vast rectangular square, was the fulcrum of the political, religious and economic life of the town, and is bordered by the main public buildings.

There are two theatres: the Odeon, built between 80-75 B.C., used for musical recitals and mime-shows, and the Large Theatre, with seating for 5,000 spectators, which dates from the Hellenistic period (200-150 B.C.). The largest baths were the Stabian Baths, built in the Samnite period and reconstructed in the Imperial period. The stucco decoration, dating from the Flavian period, is some of the finest surviving.
The many houses of remarkable beauty include the House of the Vettii, one of the most interesting examples of a rich merchant’s house, while the Villa of Mysteries is perhaps the most important building in the whole of Pompeii. Its most interesting feature is a cycle of paintings dating from the 1st century B.C. which decorate the walls of one of the rooms in the centre of the house.
Many other buildings are worth special attention. These include: the House of Menander, the House of Loreius Tiburtinus, the House of the Golden Cherubs, the House of the Faun, the Villa of Diomedes and the Amphitheatre.

By Bus At the railway station in Pompeii, bus connections take you to the entrance to the excavations.

By Car To reach Pompeii from Naples, take the 13 mile drive on the autostrada to Salerno. 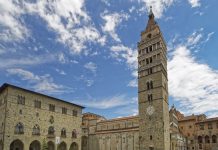 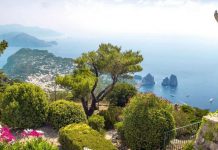