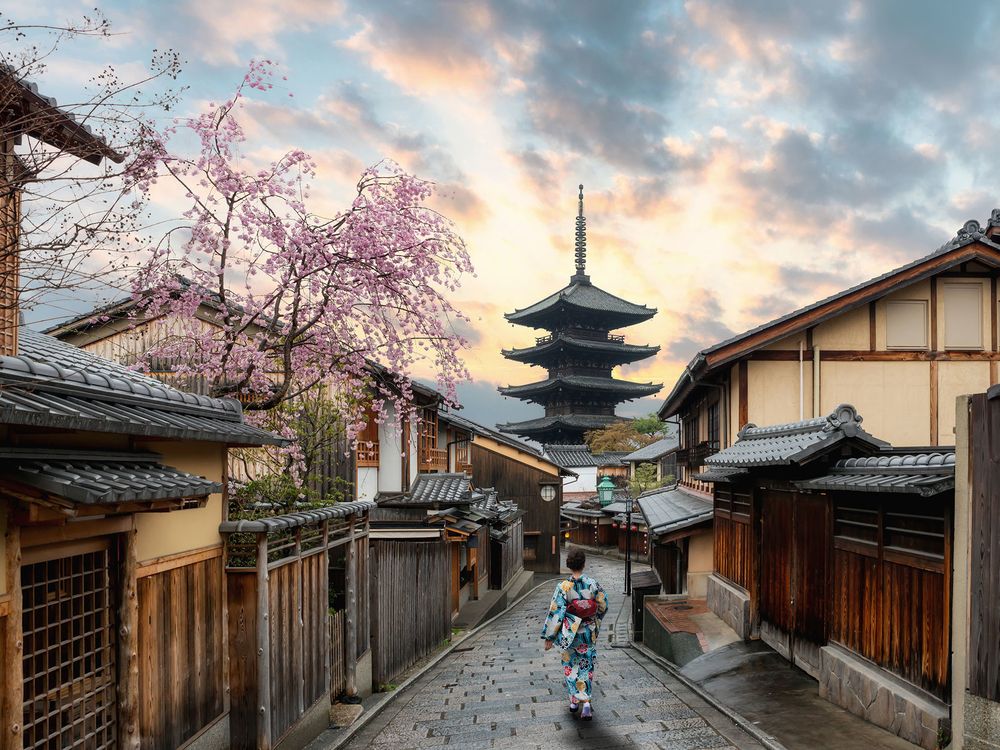 Japan, lying off the eastern coast of the Asian continent, consists of four main islands – Hokkaido , Honshu , Shikoku , and Kyushu – as well as thousands of adjacent smaller islands. The archipelago runs in an arc from north to south, stretching 3,800 km. Its total land area is 377,818 sq km, which is about 4% of that of the United States and slightly more than one and a half times as large as that of Britain . Japan occupies about 0.3% of the earth’s total land area.

Mountains claim 71% of Japan’ s land area, with plains and basins accounting for the remaining 29%. A chain of mountains extends along the middle of the long, narrow archipelago, dividing it into two sides, one facing the Pacific and the other the Sea of Japan. In general, the rivers are short and swift-flowing.

The general climate, except for part of Hokkaido in the north and some of the southernmost islands, is temperate with seasonal winds. Rainfall is abundant, ranging from 1,000 – 3,000 millimeters annually. Japan has well-defined changes of season: In the summer southeasterly winds blow across the archipelago from the Pacific, while in the winter northwesterly winds sweep across the archipelago from the Asian continent.

Japanese is the sixth most spoken language in the world, with over 99% percent of the country’s population using it. Amazingly, the language is spoken in scarcely any region outside Japan .

The origin of the Japanese language has many theories in reference to it, some believe it is similar to the Altaic languages, namely Turkish or Mongolian. It is recognized and acknowledged to be close in syntax to the Korean language.

In addition, it is believed that morphology and vocabulary were influenced Malayo-Polynesian languages to the south. The writing system of Japanese itself comes from the Chinese, but the differences between the two languages are immense.

The Japanese macaque, a red-faced monkey, is the only primate that lives in Japan and can be found in Honshu . There are several carnivores such as the black, brown and red bear, with several insectivores, such as the mole and shrewmouse, as well. Weasels, otters, Japanese mink, and a several varieties of seal can be found in Japan along with rodents such as squirrels (and a variety that fly), rats and mice. The most common deer in Japan is the Japanese deer which is small, with a coat of fur that changes with the seasons – a spotted, white coat in winter and a brown coat during the summer.

There are almost 600 species of birds in Japan with the sparrow, house swallow and the thrush being the most common ones. Almost a fourth of all birds known to live in or near water are in Japan , such as the crane, heron, swan, duck, stork, to name a few. Robins can be found as well as woodpecker, cuckoos, pheasants and pigeons.