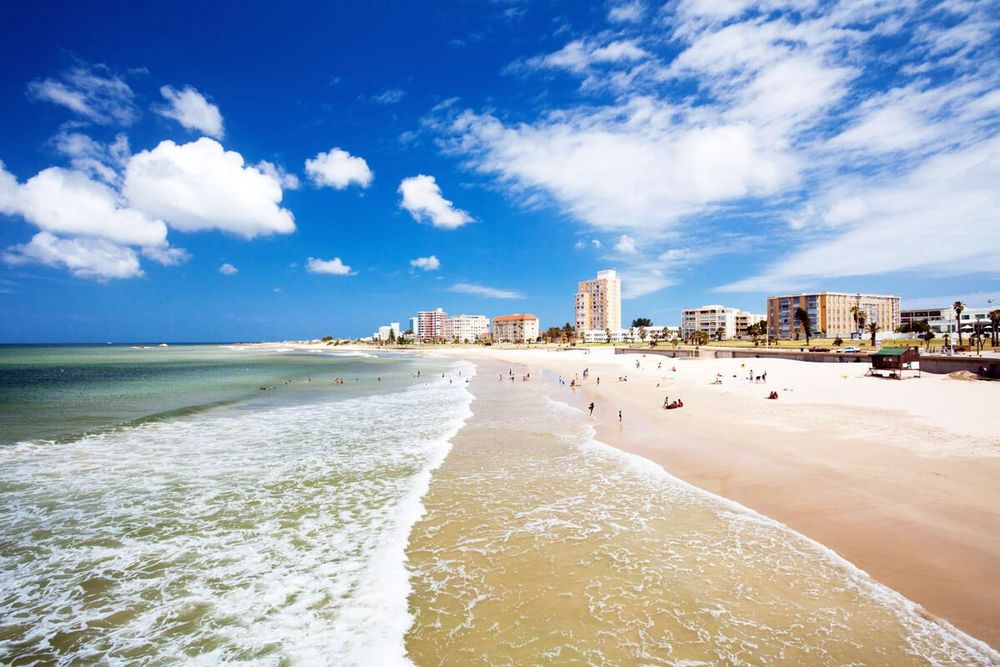 Port Elizabeth, or just PE as it often is called locally, is located some 770 kilometers (480 miles) east of Cape Town at the end of the picturesque Garden Route. The city is one of South Africa’s major destinations for tourists, many of whom come to enjoy the many fine beaches in and near the city. Port Elizabeth was founded as a town in 1820 by British settlers. It now forms part of the Nelson Mandela Bay Metropolitan Municipality, which has a population of over 1 million and stretches for 16 km (10 mi) along Algoa Bay.

Port Elizabeth is known as the watersports capital of South Africa, and has an increasing number of watersports events annually. Algoa Bay is among other watersports activities home to scuba diving, game fishing charters, surfing, windsurfing and kiteboarding. There are many cruises offered from the harbour, from sunset cruises to view dolphins to whale watching cruises. Port Elizabeth also offers many historical attractions, such as the Historic Donkin Heritage trail, taking visitors along the footsteps of the 1820 settlers.

In Port Elizabeth there are several shopping centers. Greenacres and the Bridge Shopping Center in Cape Road, is Africa’s largest shopping center under one roof. Several shops in the city specialize in African arts, crafts and curios. The Boardwalk, close to the beach, has a lot of fashionable shops and some wonderful coffee bars and restaurants, as well as a casino. Flea markets are held at St. George’s Park and Hobie Beach. Port Elizabeth also has many interesting museums, among them the country’s most impressive motor museum, but also several museums for arts and crafts where works of local and international artists are displayed.

Just 73 km. (45 mi) from the city is the exclusive, private Shamwari Game Reserve which is home to the “Big Five” of Africa. Early morning and evening game drives are available. Nearby there is also the Addo Elephant Park, dedicated to the preservation of the Eastern Cape Elephant and the Cape Buffalo. There are other smaller reserves which are just as delightful. In the area around Port Elizabeth, there are also some excellent golf courses, most notably Humewood.

Port Elizabeth Airport (PLZ) is located just a few kilometers out of the city, and has regular flights to Johannesburg, Cape Town, Durban and other South African airports. An upgrade to the terminal building, completed in 2004, created the necessary facilities to handle international flights, but so far none are scheduled as yet. In preparation for the 2010 World Cup, the runway is being extended with a view to accommodating international flights.