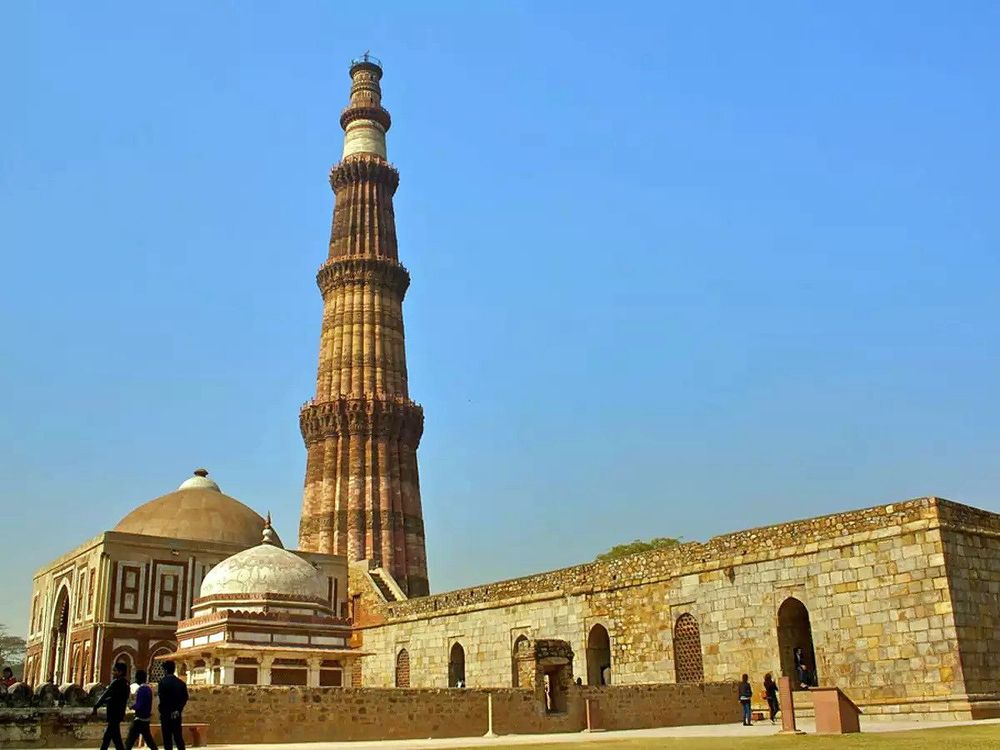 The Qutub Minar was built by Sultan Qutub-ud-din Aibak. The work started in 1192, and was completed by his successor lltutmish. It is 72.5 meters tall, and to reach the top, one would have to climb 379 steps.

The conical tower is an exquisite example of Indo-Islamic Afghan architecture. The base of the Qutub Minar measures 14.32 meters, and the top of the structure measures 2.75 meters. It is five storeys high. Each storey has a different design theme, and balconies project from each story. These balconies are supported on elaborately carved and inscribed brackets. Verses from the holy Koran are carved on its sandstone walls.

The Qutub Minar was the symbol of the might of the Turko Afghan Slave Dynasty – a dynasty whose first kings were slaves who later became kings. The Qutub Minar is a World Heritage Site and has survived the ravages of time impressively.

Why is the Iron Pillar near the Qutub amazing ?
A famous Iron Pillar, belonging to the 4th century, stands in the courtyard of the Qutub Minar. The Brahmi inscription tells us that this pillar was originally set up as a flag pole, or ‘Dhwajastambha’, of Lord Vishnu on the hill known as ‘Vishnupada’. It was a tribute to King Chandragupta II of the Gupta Dynasty. It is also suggested that a deep hole on the top of the pillar was used to fit the image of ‘Garuda’ as the vehicle of Lord Vishnu.

The Iron Pillar is believed to have been brought to Delhi by Anangpal, the Tomar King. The base of the pillar is tied to its foundations with small pieces of Iron. It rises to a height of 7.20 meters, with 93 centimeters buried below the present floor level. What is truly amazing about this pillar is that the Iron has not rusted despite the seventeen centuries that have passed. The pillar is an excellent example of advanced metallurgy of those times, and is a marvel in itself.

A stampede at the Qutub Minar
The stairs inside the Qutub coil so steeply that they’re enough to make the hardiest climber dizzy and claustrophobic. In 1981, a stampede occurred during a school trip. The lights failed, and the children panicked. The resultant stampede caused a number of deaths. The inside of the tower has since been closed to visitors.

Qutub Minar and Lightning Hits
The Qutub Minar has been hit by lightning a couple of times. In 1368, Tughlaq commissioned repairs to the Qutub Minar after a lightning strike. In 1503, Sikandar Lodi had similar structural repairs carried out. To resolve the problem of lightning strikes, a large number of Iron clamps, in the form of cylindrical inserts, were added to reinforce the stone joints. These iron clamps acted both as dowels and lightning conductors, and the Qutub Minar stands to this day in all its grandeur.

Alai Darwaza
Alai Darwaza is the gateway to the Quwwatul Mosque that was built in 1131 by Allaud-din Khilji. It is built of red sandstone, and has arched openings on all sides. The interior is intricately carved with geometric symbols and inscriptions.

The Tomb of lltutmish
The Tomb of lltutmish was built by the ruler lltutmish himself in 1235. It lies in the extension that he had added to the Quwwat-ul-Islam Masjid, and is rather plain on the outside. The inside, however, is covered with exquisitely carved inscriptions from the holy Koran.