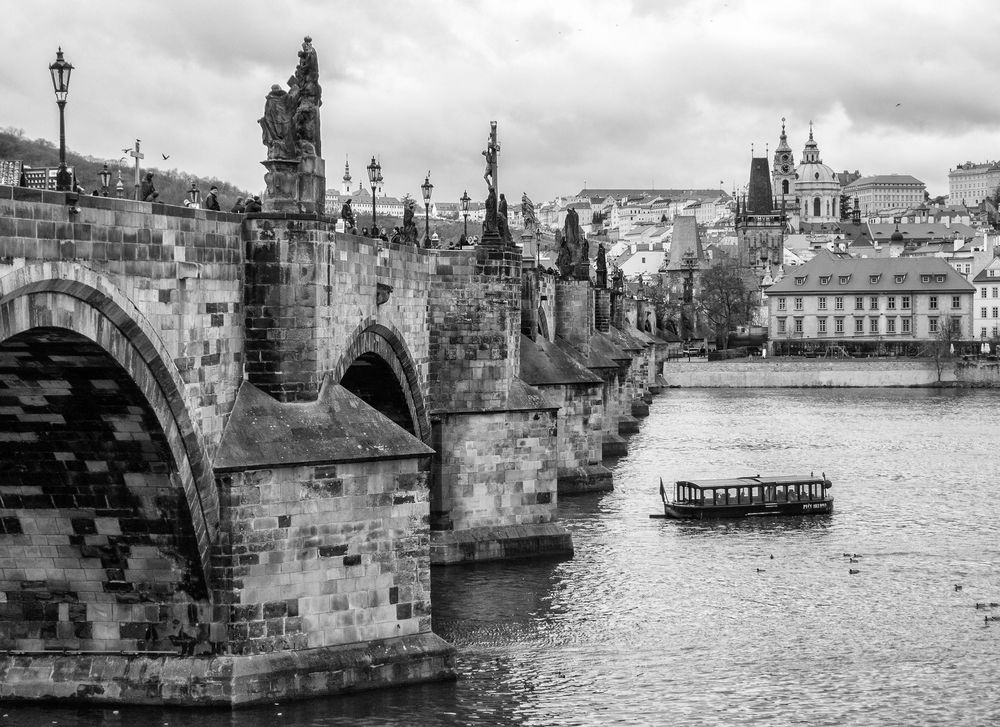 Prague has had its own stone bridge since 1169. Back then it was named Judith’s bridge, after the wife of King Vladislav I. It stood approximately in the same location as today’s Charles Bridge, but it was lower, it had more arches and it was longer, because from the Lesser Town bank it headed more along the flow of the river. Up to today, the Lesser Town Bridge Gate (Malostranská mostecká brána) indicates the axis of Judith’s Bridge, which was swept away by a flood in 1342.

In the year 1357 Charles IV gave instructions to start building a new stone bridge, named Charles Bridge (Karlův most). It still stands today thanks to its outstanding construction, for which the genius of Peter Parler is probably responsible. It is 520 m long, 10 m wide and is supported by 16 arches. The bridge’s pillars became pedestals for decorative statues. Now, 28 statues by the best sculptors of their time decorate the bridge.

The oldest preserved statue is St. Jan Nepomucký by Jan Brokoff (1683). It is erected at the location from where his body was thrown into the river. A cult dedicated to this saint spread from here, as did the custom of placing his statues on bridges. Here the orders of the church and the faculties of the univer- sity competed with one another for the glorification of their saints.

The artists who worked for them even included M. B. Braun (for example the statue of St. Lutigarde from the year 1710) and F. M. Brokoff (the most famous are the Holy Trinity from the year 1714). On the other side of the bridge stands the Old Town Bridge Tower (Staroměstská mostecká věž), richly decorated with sculptures from the 1380s. The ruling Charles IV, his son Wenceslas IV, and the land they rule are under the symbolic protection of earthly saints

If we return to the Lesser Town bank, we can visit the small, but picturesque, Kampa Island. Like Lesser Town, it is also full of splendid palaces, beautiful gardens and parks, and also romantic secluded areas where ghostly spirits, known from old Prague fairytales, hide.

The riverbanks in Prague are connected by a total of 17 bridges. The oldest and most famous, Charles Bridge, forms a part of the Royal Route (Královská cesta), while the newest, Barrandov Bridge (built in the years 1978–88) is part of Prague’s south highway bypass. The highest, the Nusle Bridge extends above the Nusle Valley at a height of 43 m.

There are eight islands on the Prague section of the Vltava River. Besides Kampa Island, Slavonic Island (Slovanský ostrov) (up to the year 1918 called Žofín) is another centre of social life. Concerts and balls have been held in the restaurant since 1830. Among others, F. Liszt, H. Berlioz and P. I. Tchaikovsky gave concerts here. One can soak up the atmosphere of the Vltava River during a cruise on a riverboat. The more able bodied can rent a small boat and savour, up close, the romantic atmosphere between Prague’s weirs. But one must be careful, the average depth of the Vltava riverbed is around 2.5 metres and the most well known of Prague’s mystical creatures, water sprites, may be lurking nearby!