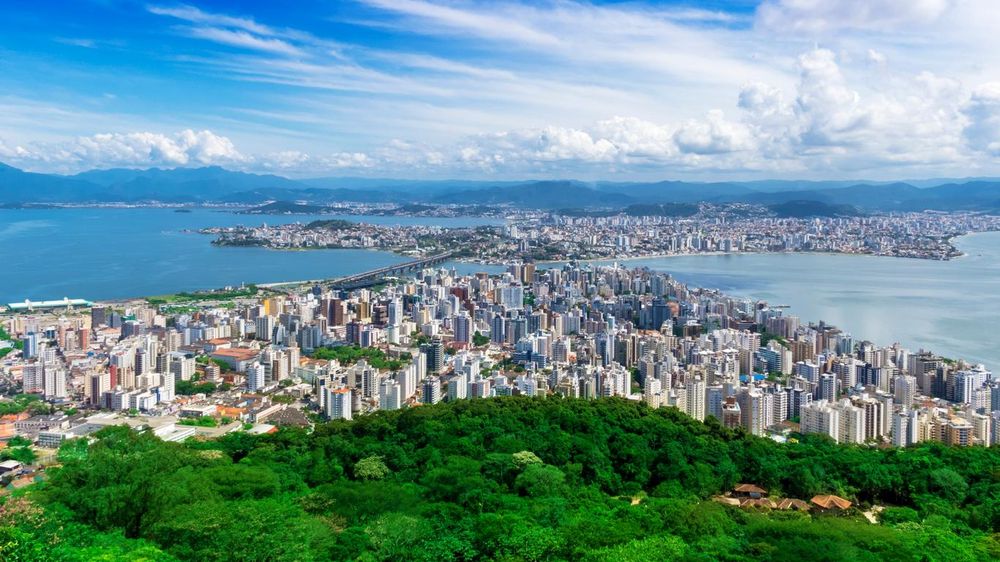 Florianópolis, capital of the southern state of Santa Catarina, lies mostly on the island of Ilha de Santa Catarina. The centre of Florianópolis, has interesting steep roads, rows of typical buildings, churches and museums, that contain many examples of colonial architecture. Most people connect it to San Francisco by its picturesque Ponte Hercilio Luz bridge that connects it to the mainland and was built in 1926 and modeled, to a smaller scale, on San Francisco‘s Golden Gate bridge. Amongst these is the former government palace, now the Cruz e Souza Museum, which took its name from the famous poet, João Cruz e Souza, from Santa Catarina, who formed the symbolist movement.

The Public Market built in 1898 which sells food and local handicrafts under the shade of a one hundred year old fig tree. Close to the centre is the house where Victor Meirelles was born, one of the authors who devised the first mass spoken in Brazil. The building is registered by the Institute of Historical and Artistic Heritage and houses the Victor Meirelles Museum.

The inviting waves on beaches such as Joaquina have encouraged successive national and international surfing championships to be held here. Beaches such as Canasvieiras, Ingleses and Jurerê with hotels and sophisticated restaurants, compete with the rustic charm of beaches such as Campeche, Ponta dos Naufragados and Solidão.

Capital of the State of Santa Catarina, Florianópolis occupies the central third of Santa Catarina Island. The link to the mainland is made easily via two public bridges one of which is Brazil’s largest suspension bridge. Florianópolis, or also commonly known for short as Floripa, has become one of the hottest tourist destinations in all of brazil with good reason. It is an immense mountainous island with more than 42 natural beaches. Known for the beauty of the local people the island attracts visitors from Argentina and Uruguay as well as Brazil.

There is a very large lagoon – Lagoa da Conceicao – in the middle of the island and a fresh water lake, Lagoa do Peri, in a municipal park right next to the ocean on the South end of the island. One can surf the waves on the beaches Brava, Mole, and Joaquina or surf the sand dunes next to Joaquina Beach.

Because the island is the home town of 3 time French Open Champion Gustavo Kuerten if you’re a tennis fan you’ll be sure to find good courts as it has become the center for tennis training in Brazil. Sun, surfing, dunes, beautiful natives, and mountains make this island one of the premiere tourist destinations in Brazil.

Among the main activities of the Ilha de Santa Catarina are diving, surfing, sandboarding on the dunes, trekking and rafting. The east-coast beaches are considered the nicest, with large waves for surfing and plenty of sand area. The northern beaches are calmer, better for swimming, and this is where most of the hotels and restaurants are situated. The city is modern by Brazilian standards with an efficient transport system and can boast the lowest crime and pollution rates among the country‘s state capitals. The city is about a 5-hour road trip from Curitiba and 12 hours from Sao Paulo.