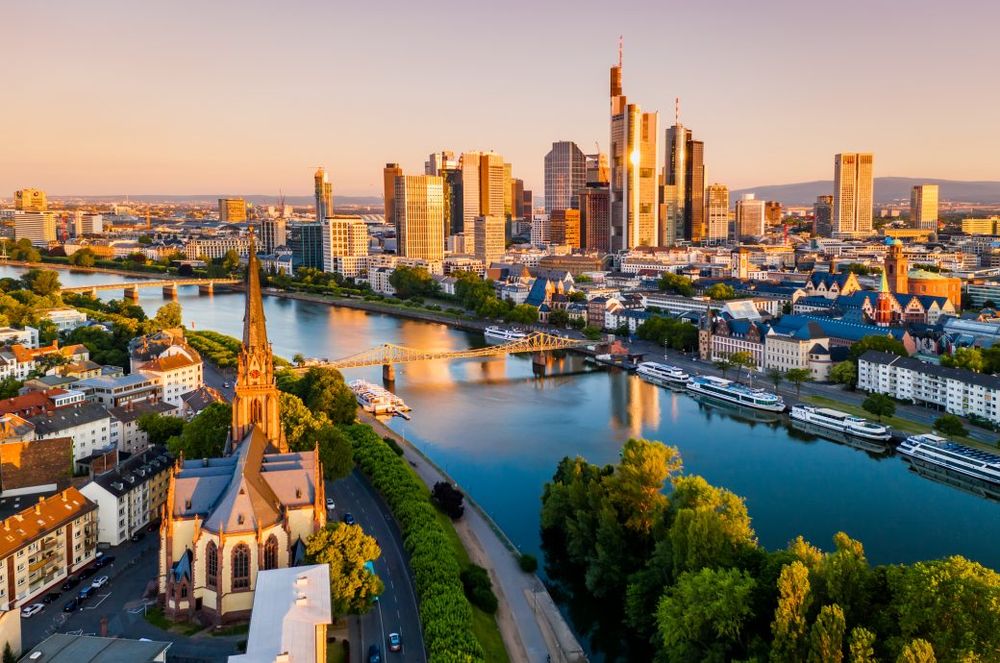 Frankfurt is for many travelers the gateway to Europe – but there is more to see than just the Frankfurt International Airport. Frankfurt is the financial capital of Germany, and thanks to its skyscrapers and the river Main, Frankfurt is also called “Main-hattan”.

Being an an internationally diverse city, Frankfurt has many great things to offer; from arts, outdoors, and shopping, to historic buildings and high-rises, here are the 10 best Frankfurt attractions you don’t want to miss.

There is no better way to see Frankfurt than from the top of the “Main Tower”, the city’s only high-rise open to the public. Take the elevator up to the 650-feet high platform to enjoy sweeping views of Frankfurt’s cityscape. You can also grab a snack in the restaurant of the “Main Tower”.

Frankfurt is the birthplace of Germany’s most important writer, Johann Wolfgang von Goethe (1749-1832).
Although Goethe’s house was destroyed in World War II, it was fully restored with the original furniture, paintings and books of the family Goethe. Take inspiration from the writing desk, where Goethe wrote “The Sorrows of Young Werther”.

The signature drink of Frankfurt is “Apfelwein”, or “Ebbelwoi” as the Frankfurters say; a light alcoholic apple cider that is produced in the regions around Frankfurt. You can find some of the best and oldest apple cider taverns in the cobblestone streets of Frankfurt’s district “Sachsenhausen”, south of the Old Town.

The Römerberg (“Roman Mountain”) is the historic heart of Frankfurt and home to its City Hall, which dates back to 1405. Flanked by half-timbered houses, this historic square used to be the place for Frankfurt’s first trade fairs in the 13th century.

Paulskirche, built between 1789 and 1833, is the cradle of German democracy: The church was used for political meetings and became the seat of the first freely elected German parliament in 1848. Today, the Paulskirche is used mainly for exhibitions and special events.

Take a walk along the river Main, which runs through Frankfurt’s city center and is lined on both sides by some of best museums in the country; among them the superb German Film Museum and the fine art Städel Museum, which focuses on the old masters.
The area is called Museumsufer, “Museum embankment”, and on Saturdays, you can hunt here for treasures at Frankfurt’s largest flea market.

7. The Senckenberg Museum of Natural History

The Senckenberg Museum is the largest museum of natural history in Germany; it showcases thousands of exhibits, ranging from fossil amphibiens, and Egyptian mummies, to the museum’s most famous attraction: its exhibition of large dinosaur skeletons, one of the biggest in Europe.

The premier place to shop in Frankfurt is the bustling pedestrian zone called “Zeil”. Also called “The Fifth Avenue of Germany”, this shopping street offers everything from chic boutiques, and international department chains, to a modern 10 floor shopping center, the “Zeil Galerie”.

9. The Museum of Modern Art

The Museum of Modern Art is not only famous for its extensive art collection, which includs artists like Roy Lichtenstein, Joseph Beuys, Andy Warhol, and Gerhardt Richter, but also for its bold architecture. Designed by the Viennese architect Hans Hollering, the museum has a triangular shape and is called “the slice of cake” by locals.

Founded in 1868 by a group of Frankfurt citizens, the Botanical Garden takes you on a horticultural journey from the African savanna, and the exotic plants of the rain forests, to the blooming flower gardens in Europe. On 50 acres and in various green houses, you can see more than 6,000 different botanical species from all around the world.