This village was founded in 104 by members of the Hu clan. His ancestor is considered to be the eldest son of the last Tang emperor, who fled to the Anhui mountains on the eve of the fall of the dynasty. 124 manors have been preserved in Side, which speak of the prosperity of their former owners.

Sidi enjoys popularity and, being included in the UNESCO Cultural Heritage List, derives considerable income from tourism. There is really something to see here: narrow streets squeezed by cream-colored walls, decorations in the form of horse heads, dark roof tiles and a variety of carvings covering the arches of the manor gates.

Wander around the village, and then study the decor on one of the arches: there will be vases, flowers, animals and much more. Try to miss the budding artists who flock to Sidi in droves to draw bridges thrown over numerous streams.

The entrance to the village is marked by the grandiose triple arch of Huwengguan paifang, built during the Ming Dynasty. Other notable buildings include the Dijitan and Zhuimutan Family Halls (Zhulrnd T&ng) on Dalujie Street. The largest building in Sidi is the Jinhai-tang assembly hall, used by all the villagers for weddings, gatherings and punishment of criminals. Once women were forbidden to enter this temple — a lot has changed since then. Siyuan is a pretty town house known for its carved window decorations. It is claimed that each window cost the owner 10,000 in modern prices.

After visiting the village, climb the nearest hill and admire the panorama. 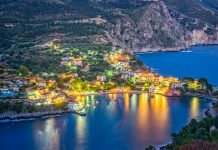