There were times when the capital of Shaanxi was the beginning of the Great Silk Road. Here the West met the East, cultures and beliefs collided and bubbled like metal in a melting pot. In the Middle Ages, Chang’an was inhabited by emperors and dignitaries, courtesans and poets, monks and merchants, warriors and wanderers. A modern traveler will find here busy street traffic and all the signs of modernization. Let the former glory of Xi’an have long become a legend, but most of the monuments of its history have survived.

Thick stone walls still surround the central district of Xi’an, and life still boils in the narrow streets of the Muslim quarter. Even the most meticulous connoisseur of history will find a lot of new and interesting things here.

Having lost the status of a political center, Xi’an seeks to extract all the benefits from its cultural potential. In recent years, the city has been fiercely fighting for the inclusion of the Great Silk Road in the UNESCO World Heritage List. At the same time, the mayor’s office is hatching Napoleonic plans for the reconstruction of the Muslim quarter. It is still unclear what is meant by this – the restoration of little-known monuments or the creation of a “Disneyland on the Silk Road”. No matter how events develop, one thing is clear: changes are coming!

Most tourists spend 2-3 days in Xi’an, although there are enough classes for at least a week. Add to this the sights of the suburbs of the Shaanxi capital. At the top of the hit parade of notable places are the Terracotta Army Museum, the tomb of Emperor Jing-di, the Muslim Quarter and the city walls. Those who decide to stay in Xi’an longer will see here ancient pagodas, museums and much more in the suburbs. While in Xi’an, it is worth organizing a trip with an overnight stay in the Huashan Mountains or in Hancheng.

For centuries, members of the local Hui community have lived in the narrow streets north of the Drum Tower. Although adherents of Islam first appeared in Chang’an as early as the 7th century, some believe that the roots of the modern Hui community can be traced back to the Ming Dynasty.

In the Muslim quarter, you will be surrounded by men in white hats and women wrapped in colored veils. Butchers and craftsmen for the production of fragrant sesame oil work in ancient houses, and tiny family mosques hide behind massive wooden gates. It is especially interesting to wander around the block in the evening. The most colorful streets are Xiangshi, Dapiyuan and Damaishijie, which start north of the big Xi Dajie Street and pass by the Muslim bazaar.

One of the largest mosques in China is built in a bizarre style combining features of Islamic and traditional Chinese architecture. Its main gate faces south, as in most temples of the Celestial Empire, and to the west – towards Mecca. At the same time, the courtyard of the mosque begins with a Chinese-style temple, protected from evil spirits by a brick screen. The garden with artificial rocks, pagodas and arches also looks completely Chinese: only four palm trees grow at the entrance. If you look closely at the highest pagoda, you will realize that there is a minaret in front of you. The Arab influence is felt here— just like in the huge prayer hall with a turquoise roof. It is located in the farthest part of the mosque and is closed to tourists. The walls of the buildings are decorated with calligraphic inscriptions in Chinese and Arabic. The mosque was founded in the VIII century, and the buildings that we see now were built in the Ming era.

To find the mosque, go west along Siyanshi Street and turn into the alley leading to the south behind the souvenir bazaar.

The forest of stell

A huge collection of more than 1,000 stone steles is kept in the Zion Temple of Confucius. 9 canonical texts of Confucianism and outstanding examples of calligraphic art are carved on the slabs. The second gallery houses the famous Nestorian stele — the oldest evidence of the Christian presence in China. Nestorians denied the divine nature of Christ and for this were excommunicated from the Western church in 431 . The fourth gallery contains steles with engraved geographical maps and portraits. This is also an art that you can observe in action.

The most impressive part of Beilin is a fantastic gallery of ancient sculpture. It exhibits stone sculptures of animals that guarded the graves of Tang nobles, picturesque tombstones and Buddhist statues.

Standing on an island in the middle of the automobile sea, the Bell Tower was the heart of Xi’an in the old days. A huge bell hung on it, marking the arrival of a new day with its ringing. From her alter ego – the Drum Tower; entrance Y2. together with the Bell Tower Y40; @8.30-21.30 from March to November, until 18.00 from December to February) announced the onset of night. Both towers appeared in the XIV century and were rebuilt in the 100s.. Musical performances are given at 9.00, 10.30, 14.30, 16.00 and 1.00. The entrance to the Bell Tower is through an underground passage on the north side.

The Qing-era city estate has been turned into an art gallery, an entertainment center and a tea room. This is a perfect example of a traditional Siamese house with a patio. It once belonged to the famous official Gao Yuesong; now it has been carefully restored. Here you can see living rooms, bedrooms, servants’ rooms, the ancestral temple and the master’s office.

Excursions begin with a performance of marionettes or a performance of the shadow theater. Since the estate belongs to the provincial Union of Artists, it has its own art gallery. Contrary to the official address, the estate is not at all under No. 144, but 20 m down the street.

Xuanzang’s epic 1-year journey in search of Buddhist enlightenment across Central Asia and Afghanistan is reflected in one of the most exciting Chinese novels – “Journey to the West”. On the pages of this Ming-era work, a real monk is accompanied by fictional characters — three disciples who protect the holy wanderer on a long and dangerous path. Among them, the greatest love of the Chinese is Sun Wukong, the monkey king.

The novel, the author of which is considered to be the poet Wu Chen, formed the basis of countless films, plays and TV series. The most ambitious project based on “Journey to the West” remains the 10-episode TV movie “Adventures of a Monkey”. In 200, the group of Damon Albarn and Jamie Hewlett Gorillaz, together with Chinese conductor Chen Shizheng, created a stage version of “Journey”. one of the best examples of Tang architecture, built in 652. It was intended to store precious scriptures brought to China by the wandering monk Xuan Tsang. He spent 19 years of his life translating the extracted texts; a whole team of learned monks assisted him in his work. The journey of Xuanzang is reflected in the most famous work of ancient Chinese literature – the novel “Journey to the West”. 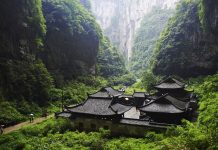 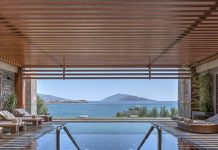