In case you haven’t noticed, China is a very big country. Such a variety of climatic zones, ecosystems and landscapes within one state is rarely seen anywhere. The northernmost point of the PRC, the county town of Mohe. it stands surrounded by cedar forests and endless swamps. In 1956, the record low temperature in the history of China was recorded here – as much as -52.3 °C. And in the extreme south of the country, in the banana-lemon city of Sanya, the thermometer does not drop below +20!

Mohe is one of the most interesting bear corners of China, not only because of its proximity to the border, but also because of the local architecture.

In 1985, Mohe burned to the ground due to a huge forest fire. While restoring the town, the responsible comrades made a curious decision: to emphasize the proximity of Mohe to Russia by building its main streets in the Russian style. This is how local imperial-style monuments decorated with domes, spires and colonnades were born. You can take a look at the panorama of the city center by climbing the stairs to the Park Polar: stars).

A small park in the center of the city is famous. that somehow miraculously survived the 1985 fire. Interesting two-tone pines grow here. Brown at the base and red at the crown, they probably haven’t come across you before. Don’t look that their trunks are so thin: each tree is several hundred years old. It’s all about the climate, which does not allow pine trees to grow all year round!

In mid-June, the sun over Mohe stands 22 hours a day. From June 15 to June 25, the annual Northern Lights Festival takes place here. It is claimed that the lights in the sky after sunset can only be seen at this time. Later, the nights get darker, but the glow no longer appears over Mohe.

Where to stay and where to eat

Foreigners can settle in Mohe only in certain places: we advise you to check with the local Public Security Department which establishments are authorized to receive tourists. Of course, you can try to negotiate with any hotel, but there are few foreigners in Mohe, and the police are on the main street — you will quickly attract the attention of the guards.

To eat, head to Fanzhongxiang Lane. From Polar Star Park, walk two blocks up Zhen Xing jie and turn right. Half a dozen inns offer noodles and other simple dishes. Most have menus with photos of dishes on the wall. Before reaching Fanzhongxiang, you will meet a fruit street, in the depths of which you can eat barbecue. In summer, Mohe sells wild blueberries and the most outlandish mushrooms that we have ever met. 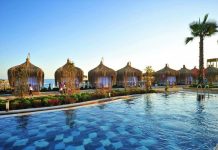 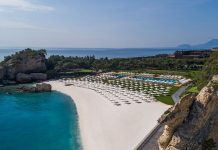 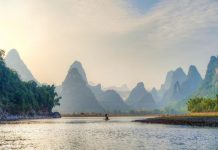