Beautiful places of the world Mysore 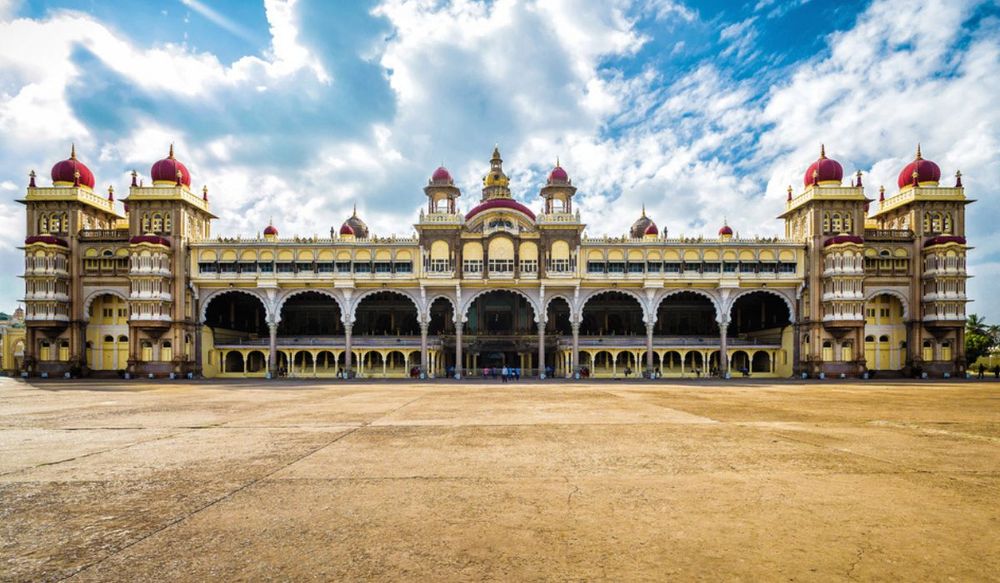 Mysore is a delightful city of palaces, gardens and true oriental splendor. Although not now the official capital, it remains the principal residence of the royal family and even if not large as Bangalore, it is every inch the princely city. Mysore beautifully planned and executed, gives no glimpse of that crushing poverty unfortunately so often associated with India.

By far the most impressive of Mysore’s buildings, most of which are ocher-colored, is the Maharaja’s Palace, a modern edifice where the oriental decorative imagination runs wild. The Palace, one of the biggest of its kind in India, is a sort of gigantic synthesis of Hindu and Muslim Styles. Entrance gateways, domes, arches, turrets, colonnades, sculpture –all are here in magnificent profusion. During the 10 nights of Dussehra, thousands of tiny lights turn the palace into a fairy-tale castle.

Inside the palace, you may see a few of the royal family’s private rooms plus the impressive Durbar Hall, a sort of “grandstand” awning looking down on the great court. The Marriage Hall has lifelike paintings of the Dussehra procession and in the museum is the ruler’s golden elephant throne used during the same festivities.

Everything seems palatial in Mysore, even if the buildings in question turn out to be the Maternity Hospital, the Technical Institute, or even the Railway Office. The City’s central square-Statue Square-just across from the palace, houses the marble effigy of the present Maharaja’s grandfather and predecessor, standing beneath a golden domed canopy.

You will want to drive a short distance outside the city proper towards Chamundi Hill-passing on the way the Lalitha Mahal-a splendid futility which vaguely resembles the U.S. Capital in Washington on a smaller scale, and which is now used about once a year. If you are a president or a prime minister you may even stay there; otherwise you will have to ask for permission at the Government House to visit it. The Italian marble staircase and ballroom are worth a glance.

Continue to Chamundi Hill, named after the royal family’s patron goddess; the site of the summer palaces, a handsome, ancient temple and the huge Nandi Bull. There is a good road to the top, but if you prefer exercise, you may climb one thousand steps three centuries old. About two-thirds of the way up is Siva’s bull Nandi, a 16 foot statue carved out of a single huge boulder, even to the garlands and bell that hang about his neck.

The view from the top of the hill is superb, for not only is there the beautiful panorama of all Mysore spread out beneath, but also ranges of hills, lakes, and the turrets of temples and churches. At night the lighted landscape stretches out like a fairyland. Here on top is the 2000 years old Sri Chamundeshwari Temple dedicated to the royal family’s titular deity. The base of the temple is the ancient part, since the ornately sculptured pyramidal tower dates from a mere 300 years. The palace is a private residence of the Maharaja. You can’t miss, though you might like to, the giant statue of Monster Mahishasura who was killed by goddess Chamundi to bring peace to the Country. Here he stands, built with mortar about 70 years ago, holding a sword and a snake and as wildly painted as a nightmare.

If at all possible, time your visit to Mysore to coincide with the Dussehra festival. The city is then at its beautiful best, clothed in color, light and joy. This is the same major Hindu celebration which is feted under different names all over India, but here it is a royal as well as a popular festival, and the pomp, grandeur, and ceremony are not to be missed. Every night of Dussehra, the Maharaja sits on his jeweled throne and on the 10th day leaves the palace in the royal procession seated like an Oriental Pope in a golden howdah atop a magnificently painted and caparisoned elephant. Not only elephants and royalty take part in the daylight and torchlight parades, but also the infantry, cavalry and camel corps-the whole pageant is a unique sight.

Fountains at Brindavan Gardens at night

Only 12 miles northwest of Mysore are the fabulous gardens at Krishnarajasagar which anyone except possibly Louis XIV himself would compare more than favorably with Versailles. The place started life very functionally –as an irrigation dam at the confluence of three rivers. The dam itself is something of a marvel: 1 ¼ miles long and forming a 50 square mile lake. It is constructed entirely in stone without any cement and is ornamented with parapets and a niche for the river goddess. But even though the dam is one of the biggest in India, it would command only slight attention if it were not for the Brindavan Gardens stretching out in terraces below it, exquisitely designed and alive with bright flowers and silvery fountains. Go on a Wednesday, Saturday or Sunday night when the gardens are illuminated and hundreds of fountains and pools of all colors, sizes and shapes bring out their beautiful best. If you stay at the handsome state-run hotel overlooking the whole panorama of the gardens, you will be sorely tempted to make Krishnarajasagar the base of all your travels in Mysore State. Or you can stay there without ever moving and enjoy the swimming, boating, and fishing.