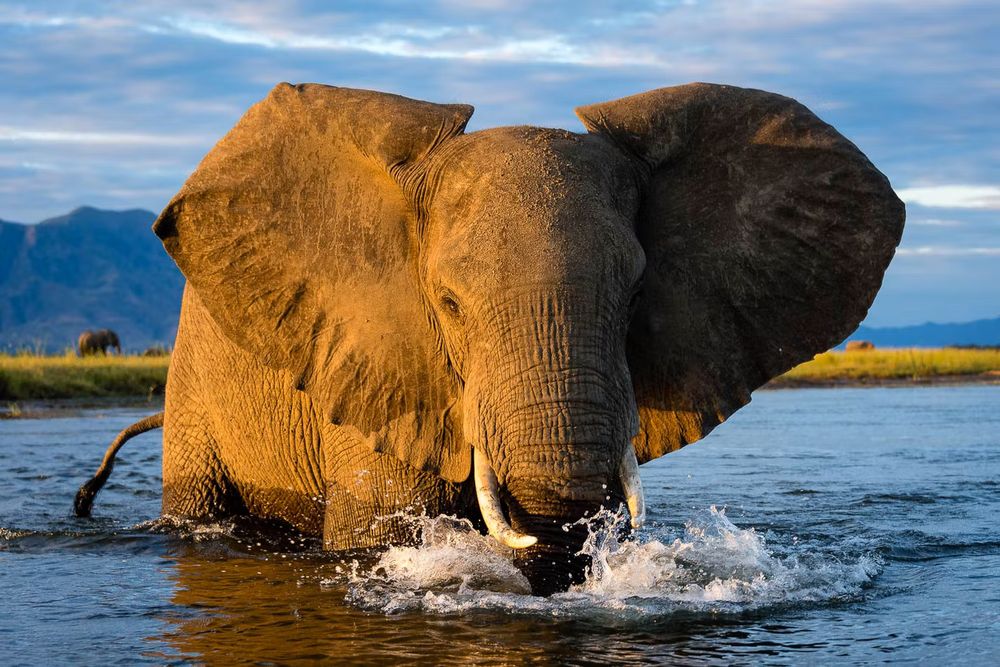 Although the building of the Kariba Dam was surrounded by controversy, both environmentally and socially, it is an impressive monument to man’s engineering expertise. The massive valley, which now forms Lake Kariba has survived, with most plant and animal species having adapted to the changed conditions. Once Zambia realises the huge tourist potential the lake offers, there are many positive implications for the struggling economy and unemployment problems in the area. The Tonga People, whose traditional lands lie buried beneath the lake, would probably benefit most from tourist development.

When the dam was completed in 1960 it was the largest man-made dam ever built. Two hundred and twenty kilometres long and in places up to forty kilometres wide, it provides considerable electric power to both Zambia and Zimbabwe and supports a thriving commercial fishing industry.

The lake’s vastness creates spectacular panoramas as the sun casts its glow across the shimmering waters catching the distinctive half-submerged trees and islands.

The dam was an initiative of the Federation existing at the time between British ruled Northern and Southern Rhodesia (now Zambia and Zimbabwe) and Nyasaland (Malawi). To dam the great Zambezi floodplain was in many ways a hopeful leap into the future. Vast areas of forest and scrub would be inundated. Literally thousands of wild animals would lose their habitats and, more importantly, the local villages would have to be relocated. Analysis of the economic advantages convinced the authorities that the ultimate benefit to the people would outweigh the loss of wildlife and disturbance to people’s lives.

The vegetation was strip cleared and burnt, making the lake rich in chemicals from the fired wood and the considerable number of remaining trees provided an essential habitat for many creatures that found their way into the lake.

Building the dam wall began in the late 1950s. Well over a million cubic metres of concrete was poured into the 36.6 metre high wall with a thickness of over twenty four metres to sustain the pressure of nearly ten million litres of water passing through the spillway each second. At the end of 1958, the sluice gates were closed and in 1963 the maximum level was reached.

The name Kariba refers to a rock which thrust out of the swirling water at the entrance to the gorge close to the dam wall site, now buried more than a hundred feet below the water surface. In many legends, this rock was regarded as the home of the great River god Nyaminyami, who caused anyone who ventured near to be sucked down for ever into the depths of the river.

When the valley people heard they were to be moved from their tribal lands and the great Zambezi River blocked, they believed it would anger the river god so much that he would cause the water to boil and destroy the white man’s bridge with floods.

In 1957, a year into the building of the dam, the river rose to flood level, pumping through the gorge with immense power, destroying some equipment and the access roads. The odds against another flood occurring the following year were about a thousand to one – but flood it did – three metres higher than the previous year. This time destroying the access bridge, the coffer dam and parts of the main wall. Nyaminyami had made good his threat. He had recaptured the gorge. His waters passed over the wreckage of his enemies at more than sixteen million litres a second, a flood which, it had been calculated, would only happen once in ten thousand years. Although man eventually won the battle when the dam was finally opened in 1960, there was a whole new respect for the power of the river god.

Within the area lived over fifty thousand people, mostly of the Batonga tribe, many of whom were vehemently against moving. Although land was set aside for them further up the valley, they were reluctant to leave their tribal lands and felt the move from the riverside would displease Nyaminyami. When the floods came and did in fact destroy parts of the bridge, this only served to confirm their fears. It took many months of reasoning and coaxing to convince the people that the bridge would provide power – a luxury they had no knowledge of – for the whole country. Eventually,however, when the trucks moved in to relocate them, they conceded, having little choice. Ceremonies were held to honour their gods and the journey to new lands began. Schools and clinics were built in some of the new areas and wells installed for their arrival. Some new villages that were relocated close to the water’s edge have prospered with the new fishing opportunities on the lake. But many mourn the loss of the rich alluvial river soil and battle to produce crops in the higher sandier areas. For the most part, the move was a severe disruption of their way of life and compensation minimal.

In recognition of this the Zambia Electricity Supply Company (Zesco) has established the Gwembe-Tonga project which aims to address some of the environmental and social issues which came about following the construction of the dam.

Road Rehabilitation, the provision of a clean water supply, electrification, construction of schools, improving agricultural production, provision of technical assistance and health improvement are the core issues that the project will grapple with.

And in order to avoid some of the mistakes of the past the local communities are being involved in all stages of the project. The project implementation strategy will be based on a cost-sharing basis with the beneficiary and other resources while the community will be expected to provide manual labour and some raw materials.

Funding for the project which will cost about US$12,642,000, has been sourced from World Bank and Development Bank of Southern Africa (DBSA). The beneficiary community is expected to contribute 25% of the project cost. And government will contribute to the funding through the Rural Electrification Fund.

As the dam began to fill, it became evident that thousands of animals were being stranded on islands. Appeals were made and money raised to buy boats and equipment for their rescue and relocation. This project became known as Operation Noah. It was a mammoth task and beset by numerous hazards. Submerged trees and stumps threatened the hulls of the boats and on the islands there were huge concentrations of snakes including the deadly black mamba. Even so, many were successfully rescued.

One story tells of a game ranger who climbed a tree in a swimming costume and gloves to catch a mamba with a noosed stick. Another tells of the rescue of a black rhino stranded on a small island. The animal was pursued for several hours until eventually it was driven past a marksman with a crossbow loaded with a muscle relaxing dart. Suitably sedated, the rhino was rolled on to a sledge, dragged ashore and loaded onto a raft buoyed up by eighteen petrol drums. Raft, rhino and all were then towed to the mainland some twelve miles away. An astonishing forty-four rhinos were rescued in this way. In all some 7000 animals were saved during Operation Noah. But there were many utterly tragic stories too. Scenes of stranded monkeys perching on treetops, unable to swim to shore, starving, every bit of greenery on the tree long eaten, their skins rotting in the water and too afraid of humans to allow themselves to be rescued. Countless smaller animals, reptiles and insects simply drowned. It was a reflection of the dominance of colonial rule in Salisbury, Southern Rhodesia, that most of the rescued animals were relocated to the Zimbabwean side and most of the people, to the Zambian side.

The conditions that had made life difficult for animals and man also conspired to produce an instant paradise for the fish. The rich fertilising effect of the chemicals from the strip clearance gave a spurt to the growth of the lake fauna. The introduction to Kariba of kapenta, tiny sardine-like fish, has proved very successful. Shoals were airlifted from Lake Tanganyika to Lake Kariba in 1967. Kapenta are also dried for easy distribution as a high protein food supplement to areas where fish are scarce. At first results were disappointing but in 1970 catches were obtained in commercial quantities. Today, a flourishing kapenta fishing industry has developed with a large number of rigs operating on the lake, but as the pressure increases, tonnage will decline and licensing will have to be carefully monitored.

The tiger fish, considered by many to be one of the finest game fish around have flourished in the rich waters of the lake. The largest average weight caught in competition is just under eight pounds, but the speed, courage and strength of the tigerfish make it a worthy opponent for the skilful angler.