Beautiful places of the world Kronborg Castle is Hamlets Castle 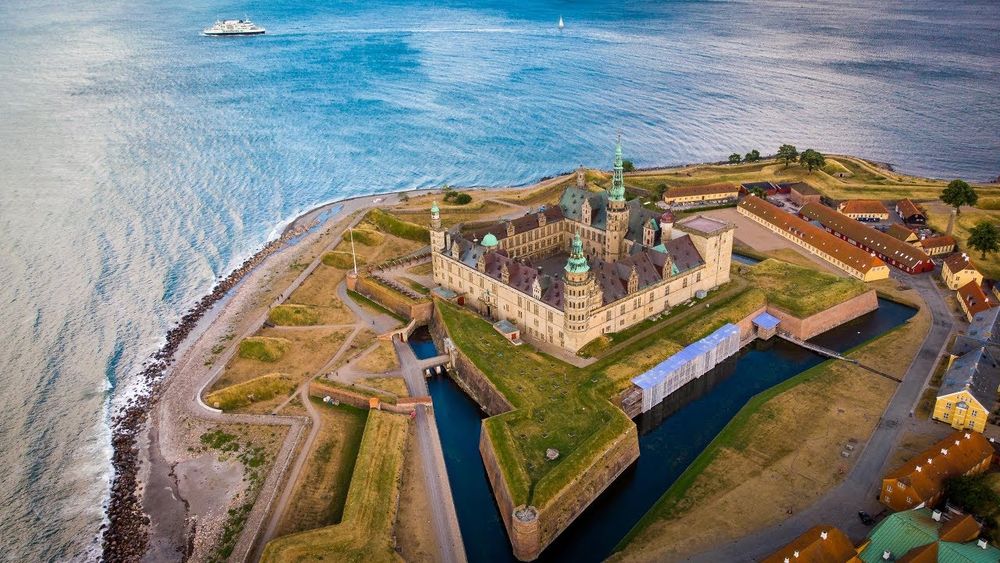 Kronborg Castle or Hamlets Castle – immortalised by Shakespeare – is situated at Helsingør or “Elsinore” and built by King Frederik II in 1574-84 (King from 1559-1588 – ruled Denmark and Norway). After the fire in 1629 his son the great builder among Danish Kings Christian IV (King from 1577-1648 – ruled Denmark and Norway 1588-1648) completed the building of Kronborg Castle in 1638. Kronborg lies at the entrance of Øresund – which was the ideal position to collect Sound Duties from ships entering Øresund to secure state taxes and revenues but also as a fortress to defend the Kingdom of Denmark.

The first Castle on the premises was built by the Danish King Erik of Pomerania around 1420. (King of Denmark 1396–1439 and best known as Erik av Pommern) The Castle was named “Krogen” and was mainly build to gather Sound Tolls from vessels using the waters of Oresund – when passing trough the narrow strait – but also as a Royal residence. King Frederik II started to restore and renovate the buildings to turn the residence into a modern Renaissance castle. Furthermore the castle was rebuilt wit new ramparts and moats together with bastions connecting the entire fortress. When the Castle was completed in 1585 – it was a well- functioning and regular four-wing edifice and three story building with yellow sandstone.

King Frederik II inspecting the rebuilding and renovation of Kronborg Castle 1584 with a plan of the premises on his lap. Painting by Nikolaj Abildgaard.

The Oresound Toll Station and Castle

Ships passing trough the strait of Oresound was forced to pay a Toll to the tax collectors at Kronborg Castle. Painting by Johan Jacob Bruun – 1739.

Being a architectural pearl near the Sound as a fortress and Royal residence – Kronborg Castle was ravaged by a very heavy fire in 1629 and only the Chapel was saved. King Frederik II’ son King Christian IV excavated the remains of the site and started the rebuilding and restoration of Kronborg Castle in Baroque Style with new interior and decorations as it appears today. From around 1700 the Castle was no longer used as a Royal residence and in 1790 the Danish army took over the entire property and renewed some of the buildings it as barracks. In 1923 the army left the premises and since a continuing restoration of the castle has taken place.

Kronborg Castle and its favorable location

Kronborg is strategically placed as a fortress surrounded by ramparts and army barracks on the spit of north Sealand by the entrance to Oresound that is only 4 km wide at this location.

Kronborg Castle was completed around 1585 – and here is the entrance to the west tower from 1584 – constructed one year before the completion with the Kings monogram.

Kronborg Castle was added to the World Heritage List year 2000 – by the UN organization UNESCO – and is now a member of the world’s cultural legacy.

The longest hall in Europe.

At the North Wing of the Castle is the great Ballroom or Knights’ Hall at Kronborg Castle that is almost 63 meters long and the longest hall in Europe. The floor is decorated with Swedish marble. The big renaissance door on the left leads to the Queens private chambers.

The chapel at Kronborg Castle

Holder Danske – The Legend of Kronborg.

Holger Danske or “Holger the Dane” is an important national symbol for all Danes – and his statue is placed in the dark Casemates of Kronborg. He is visited by several hundred thousand tourists every year. The myth from the Danish history around 1495 – is that Holger Danske will wake and defend his country if Denmark ever should be in danger or be invaded by anyone.

One of King Christian IV’s private rooms at Kronborg with furniture and original ceiling.

The statue of the sleeping Danish hero “Holger the Dane” in the dungeons of Kronborg.