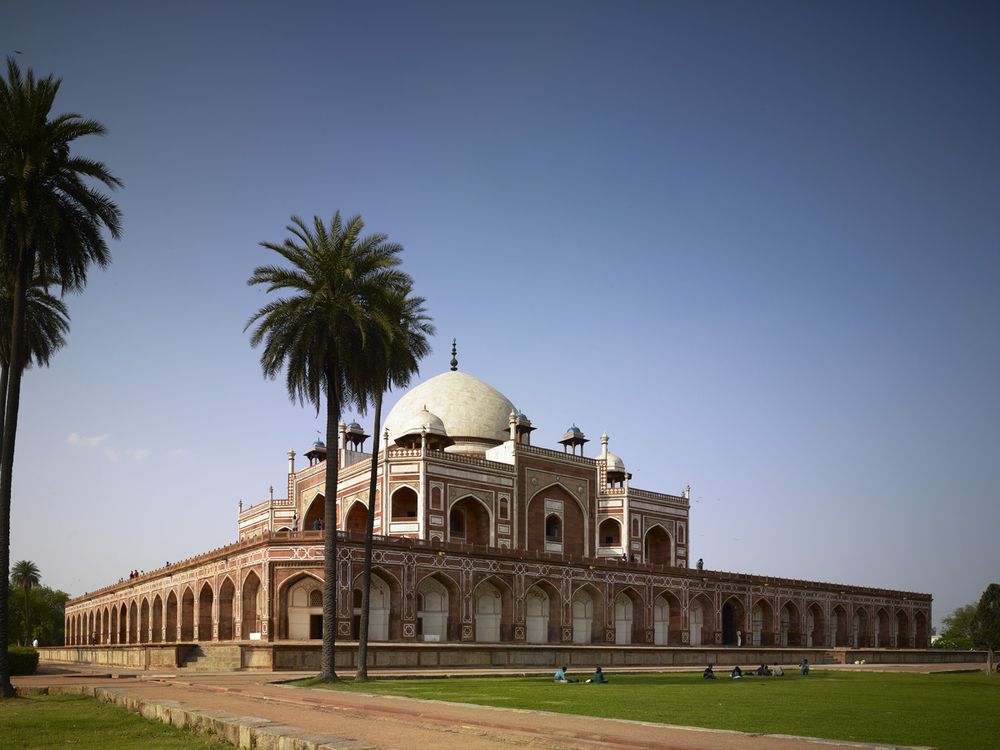 The Mughal Emperor Humayun was the son of Babur who established the Mughal dynasty in India. Most of Humayun’s time was spent in continuous warfare, and he had little time for intellectual or cultural pursuits. Humayun ruled India for a decade, but was exiled. Eventually, he took refuge with the Shah of Persia, who helped him regain Delhi in 1555, the year before his death. He died in 1556, and his Persian wife, Hamida Begum, supervised the construction of her husband’s tomb in Delhi, from 1562 to 1572. The architect, Mirak Mirza Ghiyuath, was also a Persian.

Humayun’s tomb is the first distinct example of the pure Mughal Style, which was inspired by Persian Architecture. It is also the first of a series of grand tombs surrounded by exquisite gardens. The Taj Mahal has been inspired by Humayun’s tomb, and in many ways, this magnificent red and white building is as spectacular a monument as the Taj Mahal.

What are the architectural features of Humayun’s tomb?

Humayun’s tomb stands as a landmark in the development of Mughal architecture, and also represents the earliest example of the Mughal concept of a garden tomb, with causeways and channels. This awe-inspiring monument took almost nine years to complete, and cost nearly one and a half million rupees. The mausoleum is a 42 meter high structure with a central dome. The double layered dome has a white marble exterior, but the rest of the tomb is made of red sandstone, with white marble ornamentation. It is set in a geometric arranged garden, crisscrossed by numerous water channels. Such typical Persian gardens had been introduced into India by Babur. Later, they would be found in the Red Fort in Delhi, and at the Taj Mahal in Agra.

The architectural form of the building is Persian, and this tomb is the first Indian building to use the Persian double dome. The most obvious Indian features of the architecture are the small kiosks or chhatris on the roof. The building is also noteworthy for its inlaid tile work, embodying both Indian and Persian decorative elements, and its carved stone screens. Located on the banks of the River Yamuna, this structure was declared a UNESCO Heritage site in 1993.

Which are the other monuments in the compound of Humayun’s tomb?

There are many other small monuments inside the compound of Humayun’s tomb. There is an impressive square tomb, with a double dome, that was believed to have been built for the Emperor’s favorite barber. A picturesque gateway leads to a walled enclosure called Arab ki Sarai. It was built by Humayun’s widow for the 300 Arab merchants that had returned with her, from her pilgrimage to Mecca. Other monuments include the tomb of Isa Khan, a nobleman, and Bu Halima’s Garden. The Afsarwala tomb and Masjid are also a part of the complex. Both the masjid and the tomb are in honor of an Afsar, or officer. The Afsarwala tomb has a grave with the date 974 marked on it, that corresponds to 1566-67.

Star Fact
The last emperor of the Mughal dynasty, Bahadur Shah II, sought refuge in the tomb of his ancestor Humayun during the uprising of 1857. He was later captured here by a British officer, Lieutenant Hudson, and this marked the end of Mughal rule.