Beautiful places of the world Château du Haut-Kœnigsbourg: what lies beyond the walls? 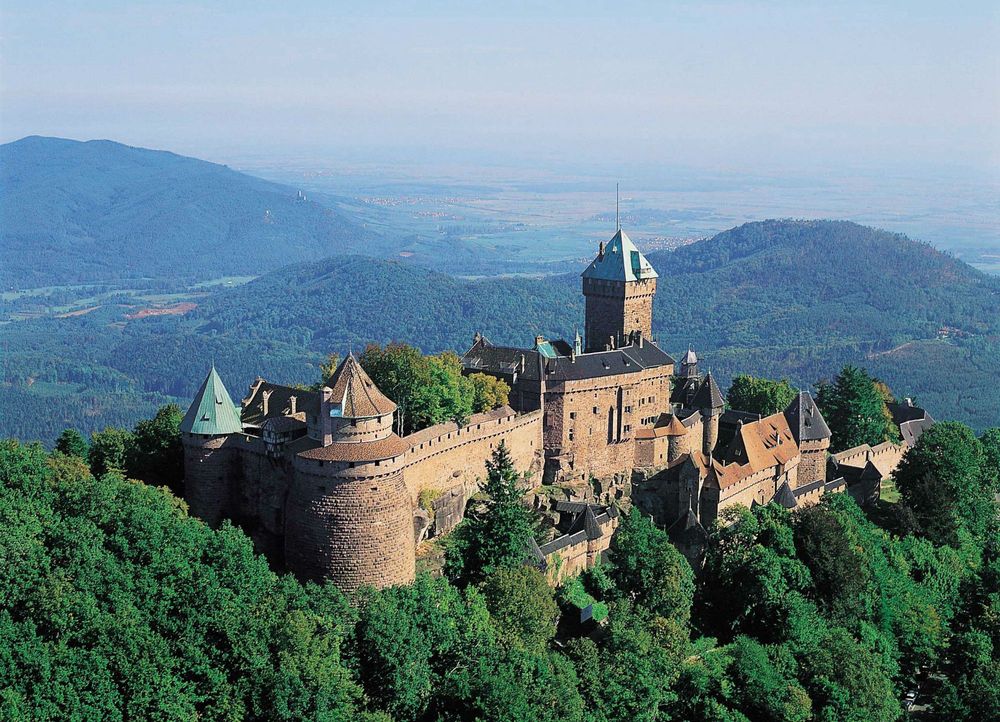 This castle rightly carries the crown of one of the best in Alsace. So if you somehow are there, it is time to enjoy every nuance.

It is near Sélestat (a town in a French Alsace). The nearest town – Strasbourg. It is 55 km from the castle.

The exact date is not saved by any of resources. But the first written reference is related with the 12th century. The document where the construction building is mentioned is a lawsuit. There the abbey from Saint-Denis resented the masters from the Hohenstaufen family. In that lawsuit the church was begrudging that the nobles built a construction illegally and it was done on the church lands.

Initially, the castle consisted of two fortresses, but the plan changed. During a long time the building “controlled” the flux of goods and alcohol because it was at the intersection of trade ways.

In the 13th century the castle went to dukes of Lotaringski who seized it by force. A bit later the Château du Haut-Kœnigsbourg came into disrepair.

In 1479 it was taken by dukes Tiersteins. They worked on rebuilding the greatness the castle had lost. It took 17 years, many famous specialists and masters were involved. The époque of oblivion was replaced by the time of active growth.Château du Haut-Kœnigsbourg It was 1517 when the last of the Tiersteins died. The castle became Maximilian I poverty that wrote an order as soon as he gained it. There he demanded to start building “the star” east of the bastion.

Thirty Years war “licked” the beauty and functionality of the castle much. The Château du Haut-Kœnigsbourg had been defeated from the Sweden for 2 months, but finally it couldn’t long any more. The conquerors burnt and robbed every part of the castle. The next two centuries became grey and forgotten.

Only in 1862 the castle remembered (and immediately it got the status of a historical monument!). The greatness that had been lost was back, it took 3 years to do that. In 1899 emperor Wilhelm himself took a part in rebuilding the castle. According to his demand 3,5 millions of marks were taken from the coffers. The most famous historians, designers and masters of art and many other were involved.

As a result, 8 years of painstaking work made the castle at least as good as it used to be or even better.

BUT! Due to great imagination of one of the masters it became not exactly like the original look it had had. So the historic monument was it called that only in 1993.